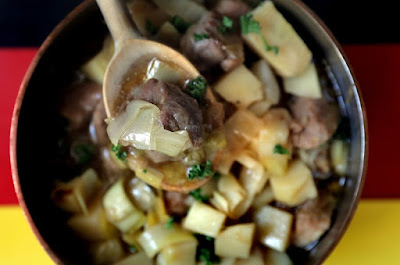 A recent story in the Washington Post reported on a sad trend: All over the country, German restaurants are going out of business.
This news is especially troubling because Germans still make up the largest ancestry group in the United States. But the food of their homeland is rarely served in restaurants. The reason given most often is that German food is heavy.
To which I say: So?
What’s wrong with heavy? Let’s not even call it heavy, let’s call it hearty. That sounds better, and is more accurate. It’s hearty, it’s filling, it’s full-flavored. And it’s wonderful.
German food typically comes one of three ways: made with pork, made with bacon or made with both pork and bacon. But the country is also known for its robust, chewy breads and its delicate, cream-filled pastries.
And, of course, its beer. German beer — stouter and sturdier than American — is a perfect accompaniment for dishes made from pork and bacon, as well as brawny loaves of bread.
I took a culinary tour of Germany and decided to stay away from the most obvious choices. That meant no sauerbraten, no sausages, no potato pancakes. It would have meant no schnitzel, but I love schnitzel, so I made it anyway.
Specifically, I made Schnitzel a la Holstein, which is my favorite kind. Originally created at a Berlin restaurant for a well-known patron named Friedrich von Holstein, it features a fried egg, anchovies and capers on top of the schnitzel, a breaded veal cutlet.
I highly recommend using veal, if you can find it (I had to go to a butcher) and afford it. A lot of people and some restaurants make schnitzels from pork, but that is a choice made more out of frugality than flavor. There is nothing like a mild and tender veal schnitzel, unless it is a veal schnitzel topped with a luscious egg, the yolk dripping slowly down its side, and salty capers and anchovies.
If you don’t care for the toppings, a regular old wiener schnitzel, which is just the breaded cutlet, is wonderful, too.
To contrast with the rustic schnitzel, I decided to add a little refinement to my table. Nothing is more refined than a sauce made from cognac and cream.
Because it is German, this particular sauce was served with pork. I took the most tender part of the pig, the tenderloin, and sliced it into thin medallions. These I browned and simmered in a sauce redolent not only of cognac and cream, but also mushrooms (a full pound of them for four servings), shallots and the sweet German wine Riesling.
You might be tempted to worry, as I did for a moment, that the natural sweetness of the wine and the pork might result in a dish that was overly cloying. But it did not. The savory mushrooms and smooth, rich cream effectively neutralize the sweetness and create an impressive, sophisticated meal.
Sticking with the theme of pork, I also made a stew with pork, leeks and potatoes. It is just the perfect thing to eat after a long day of hiking in the Alps.
The pork — I used meat from the shoulder — cooked up nicely tender after just about an hour. I added the leeks and diced potatoes about halfway through the cooking time, which allowed them to become succulently soft but not overcooked. It is a deeply satisfying, earthy recipe that is easy to make and divine to eat.
All of that meat deserved a good salad, so I made an excellent one with beets and onions. Horseradish gives it a modest bite, and it is all brought together by the tang of vinegar and the moderating presence of vegetable oil. A pinch of sugar smooths out the vinegar, while caraway seeds (the recipe suggests either caraway or cumin) add a welcome sharpness to cut through the rich, root flavor of the beets.
Finally, I could not leave Germany behind without trying one of its legendary pastries. The country is famous for its konditoreis, bakeries that sell only pastries, not bread. The konditerei baked goods are sublimely light and often filled with a heavenly pastry cream.
I decided to make a cream puff, which puts pastry cream to its perfect use, between halves of a delicate pastry shell.
The shell is made from a pate a choux dough, the same as an eclair. This dough, when cooked, puffs up and becomes hollow in the middle, which makes it a perfect choice for pastries. Getting this magic to work requires a few simple tricks (add the flour all at once to a mixture of melted butter and water, mix in the eggs one at a time), but they are easy to do and the result is absolutely worth the technique.
The filling could not be simpler. Simply whip a batch of cream, and fold in powdered sugar and vanilla extract. Sometimes — often — simplicity is best.
Put the filling in the shell and it becomes impossible to eat one without a big, silly smile on your face.

Adapted from “The new German Cookbook,” by Jean Anderson and Hedy Wurz. Makes 4 servings.
1 pound veal cutlets, pounded very thin as for scaloppine
1/2 teaspoon salt
1/8 teaspoon pepper
7 eggs, divided
1/3 cup unsifted all-purpose flour
1 cup fine dry white bread crumbs
3 tablespoons butter
3 tablespoons peanut or other vegetable oil
8 anchovy fillets
1/2 tablespoon capers
1 lemon, cut into wedges
Preheat oven to 275 degrees. Season both sides of the veal with salt and pepper, and let stand at room temperature for 10 to 15 minutes. In a bowl, beat 3 of the eggs.
Place the flour on one plate, the beaten eggs on another plate or in a bowl and the bread crumbs in a third plate. Line up the three on a counter near the stove.
Heat the butter and oil in a heavy, 12-inch skillet over moderately high heat until hot (a cube of bread dropped in immediately sizzles). Dredge 2 of the cutlets (both sides) through the flour, then dip in the egg and coat with bread crumbs; then brown both sides in the hot oil, about 3 minutes per side. Remove to a shallow pan lined with paper towels and set, uncovered, in the oven to keep warm. Repeat with the other 2 cutlets.
Meanwhile, cook the remaining 4 eggs sunny-side up. Place an egg on each pan-fried cutlet, add 2 anchovy fillets and sprinkle capers over each one. Serve at once with the lemon wedges.
Per serving: 614 calories; 39 g fat; 14 g saturated fat; 432 mg cholesterol; 37 g protein; 28 g carbohydrate; 2 g sugar; 2 g fiber; 1,325 mg sodium; 155 mg calcium

MEDALLIONS OF PORK WITH MUSHROOMS IN COGNAC-CREAM SAUCE

Recipe from “The New German Cookbook,” by Jean Anderson and Hedy Wurz. Makes 4 to 6 servings.
1 to 1 1/4 pounds pork tenderloin, sliced 1/2 inch thick
5 tablespoons unsalted butter, divided
1/4 cup cognac
1/4 cup Riesling wine
1/2 cup beef broth
1 pound baby portobello mushrooms (also called cremini), cleaned and thinly sliced
1/4 cup minced shallots
2 cups half-and-half
Salt and pepper
Preheat oven to 200 degrees.
Brown the pork in 2 tablespoons of the butter in a large, heavy skillet over moderately high heat; remove to a shallow baking dish, cover with foil and keep warm.
Add the cognac and wine to the skillet and heat 1 to 2 minutes, scraping up any browned bits. Add the broth and boil, uncovered, until reduced by two-thirds. Pour the cognac mixture over the pork, re-cover and set in the oven.
Add the remaining 3 tablespoons of butter to the skillet, add the mushrooms and shallots, and saute 8 to 10 minutes, until the mushrooms are limp and their juices have evaporated. Stir the pork medallions and all liquid back into the skillet, add the half-and-half, and simmer, uncovered — but do not boil — over moderately low heat for 10 to 15 minutes, until the cream reduces by 1/2 and is the consistency of thin white sauce. Season to taste with salt and pepper, and serve at once.
Per serving (based on 4): 492 calories; 32 g fat; 19 g saturated fat; 143 mg cholesterol; 29 g protein; 13 g carbohydrate; 9 g sugar; 2 g fiber; 257 mg sodium; 153 mg calcium

Adapted from “Best of German Cooking,” by Edda Meyer-Berkhout. Makes about 15 servings.
1/2 cup plus 1 tablespoon water
4 tablespoons butter
1 1/4 cups bread flour or all-purpose flour
4 eggs
1 cup whipping cream
2 tablespoons powdered sugar, plus more for sprinkling
1/2 teaspoon vanilla extract
Preheat oven to 400 degrees. Line a baking sheet with parchment paper (or lightly dust with flour), and set aside.
In a medium saucepan, bring water to a boil. Add butter and allow to melt, stirring to mix. Lower heat. Add flour, all at once, beating vigorously with a wooden spoon. Continue cooking over low heat, stirring constantly until dough pulls away cleanly from side of pan and forms a ball; do not overcook or dough will not puff when baked.
Remove from heat and add 1 egg; quickly work egg into mixture. Continue adding 1 egg at a time, working in each totally before adding another. If necessary, use a whisk to break up any lumps in the dough.
Using a tablespoon or a pastry bag, place small mounds of dough about 1 1/2 to 2 inches high on prepared baking sheet (make them all the same size so they bake evenly). Bake 25 to 30 minutes, until golden brown; do not open oven door during first 20 minutes of baking. Cool on a rack.
Whip cream in a medium bowl until stiff peaks form. Fold in powdered sugar and vanilla. Slice or cut the puffed buns in half, so there is a top and bottom. Spoon or pipe cream mixture into the bottom of each bun and replace the bun tops. Dust lightly with powdered sugar.
Per serving: 143 calories; 10 g fat; 6 g saturated fat; 79 mg cholesterol; 3 g protein; 10 g carbohydrate; 2 g sugar; no fiber; 26 mg sodium; 20 mg calcium
Posted by Internationalfoodblog.com at 2:47 PM No comments: 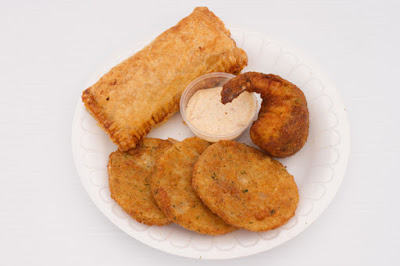 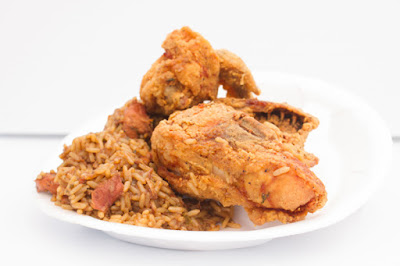 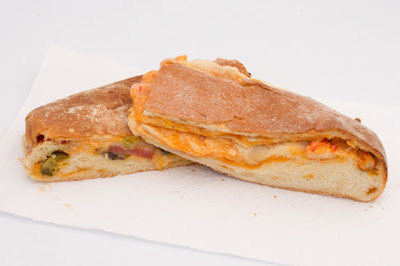 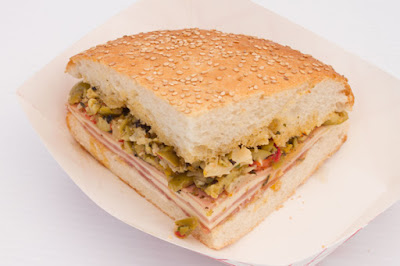 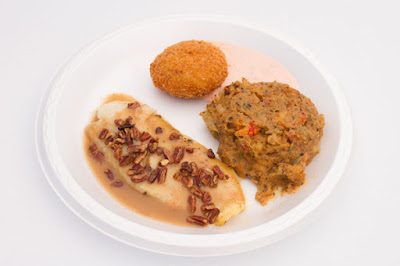 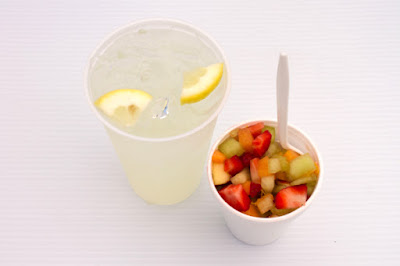 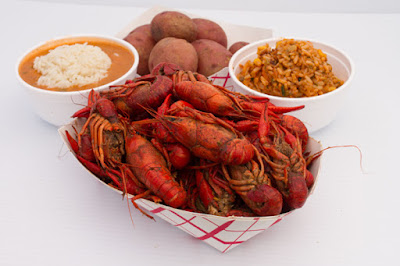 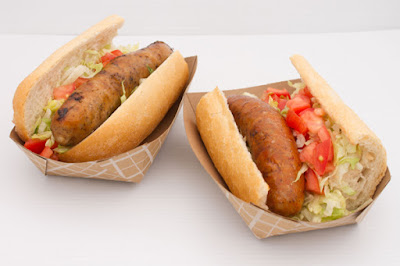 Posted by Internationalfoodblog.com at 2:36 PM No comments: 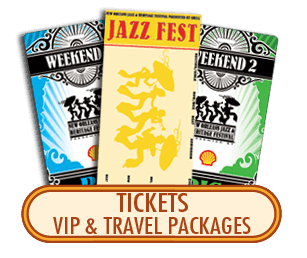 Posted by Internationalfoodblog.com at 3:35 PM No comments: 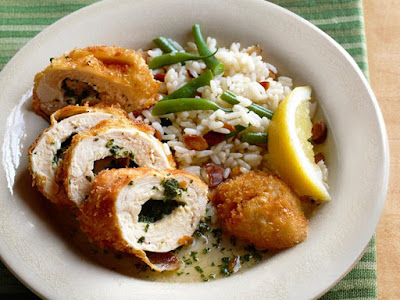 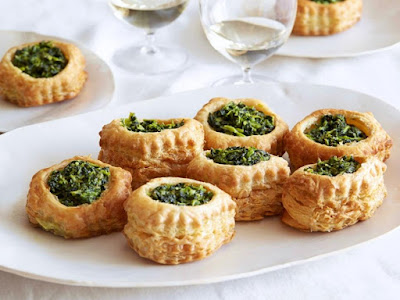 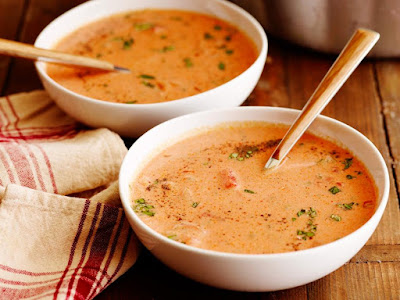 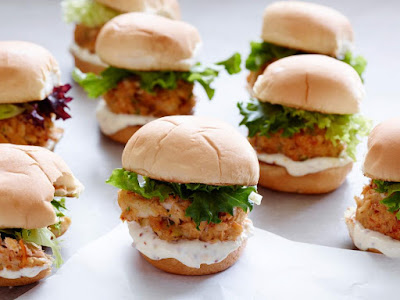 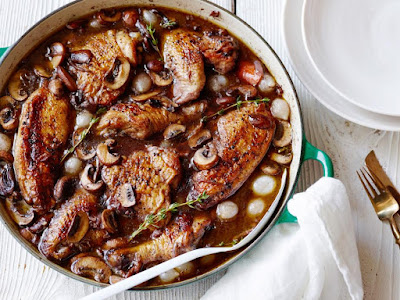 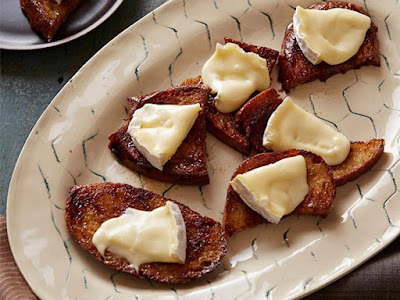 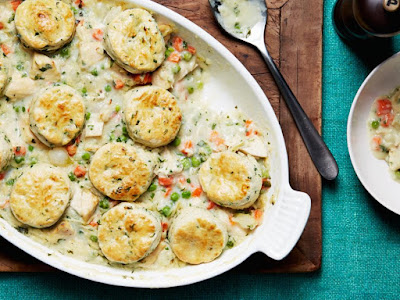 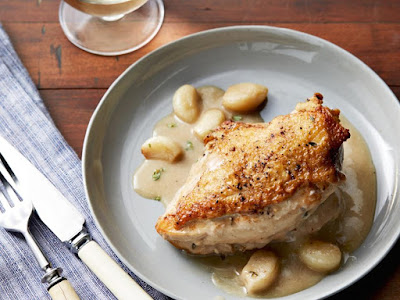 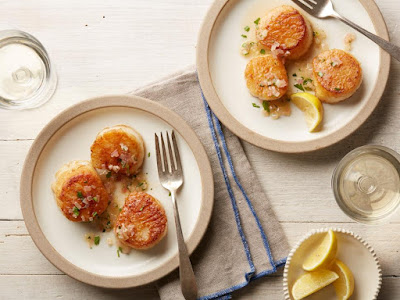 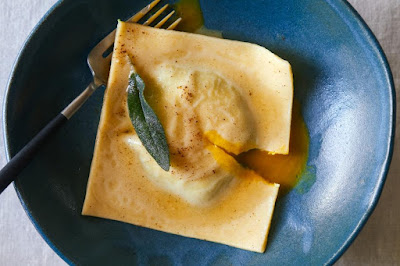 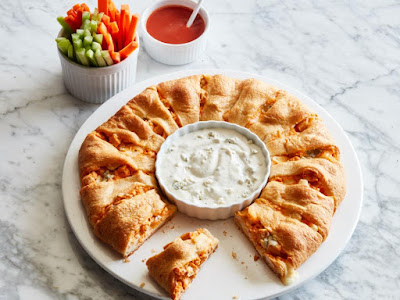 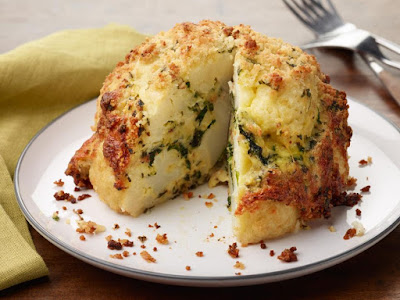 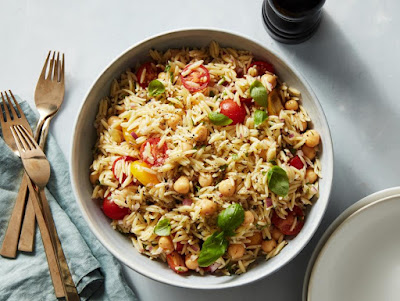 Posted by Internationalfoodblog.com at 3:44 PM No comments:

Posted by Internationalfoodblog.com at 3:36 PM No comments:

Giada De Laurentis invites friends over for a casual get-together while she tests various panino recipes and combinations for her new restaurant, Pronto, in Las Vegas. Her friends sample her menu, which includes a France Meets Italy Panini, a Chicken and Pepperonata Panini, a Royal Beef Tenderloin Panini, a Strawberries and Cream Panini and, to wash it all down, Aperol Spritz cocktails. Then each guest takes a turn at making her own custom panini. 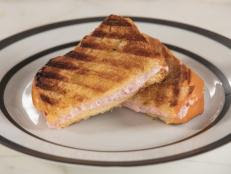 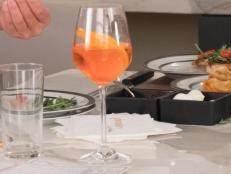 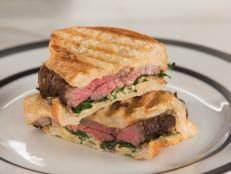 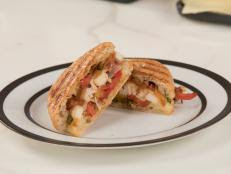 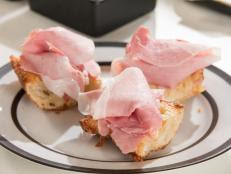 Posted by Internationalfoodblog.com at 4:08 PM No comments: