I have saved the pdf recipe to 2 pages of jpg for you to save and then print out.  From WIKI

Sazerac (cocktail)
From Wikipedia, the free encyclopedia
The Sazerac is one of the oldest known cocktails,
with its origins in pre-Civil War New Orleans,
Louisiana. The original drink is based on a
combination of Cognac and bitters created by
Antoine Amédée Peychaud in the 1830s, and is
reported to be the first cocktail ever invented in
America. [1] Since its creation, many different recipes
have evolved for the drink, usually involving some
combination of Cognac, rye whiskey, absinthe,
Herbsaint and Peychaud's Bitters.
The Sazerac cocktail was named by John Schiller in
1859 upon the opening of his Sazerac Coffee House
in New Orleans. Both most likely derive their name
from a popular brand of Cognac, Sazerac-de-Forge et Fils 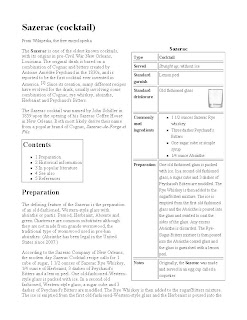 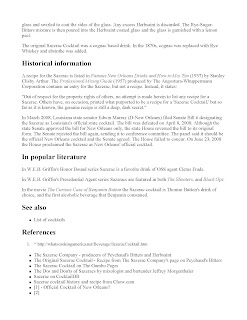 Posted by Internationalfoodblog.com at 10:24 AM