UPDATE:  Have a try of this sandwich with eggplant from foodista: 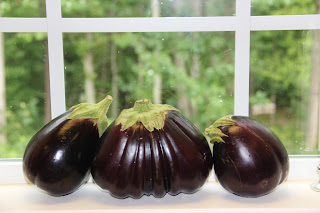 Original photo by me.  I adapted this recipe below from the Greensboro News & Record which was in the Life section on 7 29 2012.  The recipe was provided by Susan Nicholson, an Atlanta based cookbook author and registered dietitian. Her email is menuplanner@mindspring.com.  The Menu Planner is also accessible at www.7daymenuplanner.com. She does the Seven-Day Menu Planner in the Life Section of the News & Record every Sunday. I have made more than one of her recipes.  Below is her recipe.  It caught my attention, however, I never make anything just the way it is printed so I made changes and adaptations. It's just the way I am. 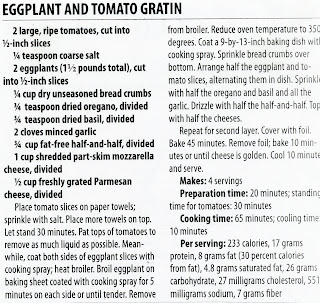 I  do not like a lot of salt nor sodium.  I used none but if you must, I would cut back to 1/8 tsp. coarse salt.  (Note:  after adding up the sodium in just the Parmesan, the mozzarella and the Pepper Jack that I used there were 1800 mg. of sodium in the recipe the way I made it.  To me that is enough!!) (The recipe calls for part-skim mozzarella - I don't use low fat or skim milk cheese or part skim milk cheese because it does not melt like regular cheese and can turn rubbery.)  But if your cholesterol is HIGH you can use it.

I put Morton Lite salt on the tomato slices instead of coarse salt and put on a paper towel covered plate.
I used 3 medium sized eggplants because as you slice horizontally from the stem end and as you get to the bottom the last slices are FULL of seeds.  So I use the top half of 2/3rds of the 3 eggplants. I ALSO PEEL MY EGGPLANT.  I don't leave the skin on. (SPECIAL NOTE:  As the season goes on even if you pick the eggplant FRESH from your own garden the morning you make the recipe the slight amount of bitterness in eggplant gets stronger so slice the eggplant as directed and put in a colander over a paper towel covered plate.  Salt both sides and let set in the colander for 30 minutes (again, I use Morton Lite Salt and have for years) and you will be amazed at the brown liquid that comes out of the eggplant.)

After 30 minutes dry the eggplant off and rub off as much of the salt off without damaging the slices.
Dab the liquid and the salt very gently off the tomato slices.

I used 1/2 cup of Panko bread crumbs (instead of regular ones) so the texture would be firmer in the bottom of the casserole.

I like spicy and herby food so I used 1-1/2 tsp of Italian seasoning (instead of the Oregano), divided
1 - 1/2 tsp. of my own dried basil leaves crumbled, divided
I used 1/2 tsp. garlic powder instead of minced garlic.

I am a big cheese freak so I used 1 cup of freshly grated parmesan.

I did not broil the eggplant (which was just picked 3 hours before I made) the recipe because as I started to broil it it began to dry out so I rescued it before too much damage was done (I don't like broiling anyway)
I fried the eggplant slices in regular oil (next time I am going to use EVOO) until brown and semi-soft.
DRAIN WELL after cooking.

Spray the casserole dish (I used a meat loaf type casserole not a 9 x 13) as directed.
Pour all of the Pankos in.
Layer slices of eggplant, then tomato slices on top.
Then sprinkle with 1/2 Italian seasoning and 1/2 basil.
As recommended use 1/2 of the 3/4 cup fat-free half-and-half.
Then add 2 slices of the provolone cheese laying them on top of the veggies.
Repeat the layering exactly as above starting with eggplants and finishing with the 2 slices of Pepper Jack.  Sprinkle half of the parmesan on it.
Cover with foil and bake at 275 for 30 minutes.
(Less time so eggplant won't get soggy)
Take off foil. Cook for 10 minutes more!!  Let cool for at least 10 minutes!!
Serve with sourdough or real Italian bread (not American Italian bread) toasted or not toasted with butter!!

recommends pairing this dish with

Posted by Internationalfoodblog.com at 1:14 PM