4/22/2012-4/26/2012. Jeff & Betsy Penn's and owners' collections of antiques public viewing & auction.  Items brought $3.2 million.  Auction was held by Iron Horse Auction Company:
http://www.ironhorseauction.com/index.php?subp=1&sct=&pg=ap&pid=25164&ap_sub=cat
and Leland Little Auctions http://www.llauctions.com did the auctioning.  I don't know how long these links will be good as we all move onto other things. ***** I first visited Chinqua Penn in 1987 and was enthralled with the "little Biltmore" as it is affectionately named. Visited Biltmore after that. ***** I won't go into the story as to why the contents were auctioned off. You can Google that. Below is one of my personal photos of the Chinese pagoda.  It didn't look like this last week.  I couldn't bear to take a photo of it in its deteriorating condition although I took over 400 photos during the dates above. 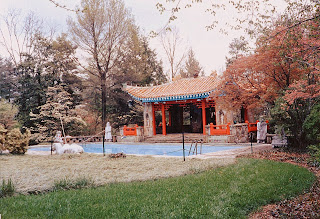 My intent here is to talk about the Food, Kitchen, etc. since this is a food blog.  Plantation's main history goes from 1925 to 1965.  Link to site IS NOW TEMPORARILY CLOSED:  http://www.chinquapenn.com.  Jeff and Betsy Penn were world travelers and had antiques, memorabilia, objets d'arts from ALL over the world so the food could have been American, Chinese, French, etc.  I am only speculating on the menus as there is not much research on the foods they served.

Part 2 will be cookbooks that might have been in the kitchen where the servants prepared the food.
AND MORE!!

Posted by Internationalfoodblog.com at 3:05 PM