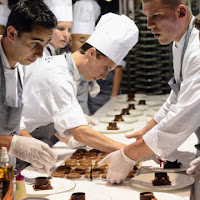 Cannes Film Festival gala dinner preview menu:
Amuse Bouche: King crab with shrimps
Entrée: Pea and Caviar with white foam of onion
Main Course: Sea bass filet with rhubarb and celery, light bouillon with green apple, cinnamon and green aniseed
Dessert: Chocolate and Carribbean cream
Where To Eat
La Mère Besson
Mere Besson is one of the most beloved Cannes restaurants that have thrived since the 1930’s. The restaurant is known for keeping Provençal traditions. Many stars venture out to this Cannes gem for French favorites like the estouffade provençale, braised beef with red wine topped with a rich sauce made from herbs, garlic, mushrooms and onions. (La Mère Besson, 13 rue des Frères Pradignac +33 4 9339 5924)
La Palme d'Or
Located in the Martinez Hotel, La Palme d'Or is one of Cannes best restaurants. With 2 Michelin stars and a 17/20 rating in the GaultMillau restaurant guide, the La Palme d'Or is apart of the highly coveted circle of the best establishments in France. Chef Christian Sinicropi delights patrons’ senses with rich daring food and a menu that changes with the seasons. Be prepared to dine alongside celebs, moguls and royalty.
Vesuvio
Conveniently located on Croisette between the Martinez and Carlton, Vesuvio has it all. From great food, great service and great vibes, the restaurant named after an infamous Italian mountain is an explosion of Italian flavors. (Vesuvio, +33 4 9394 0828)

Posted by Internationalfoodblog.com at 1:45 PM