Goulash can be made with beef or pork but the traditional way of making it is with beef. Originally this was the signature dish of the herdsmen on the Hungarian Great Plain (puszta), the "Hungarian cowboys" who used to live a nomadic lifestyle and would cook it over the fire in a cauldron. 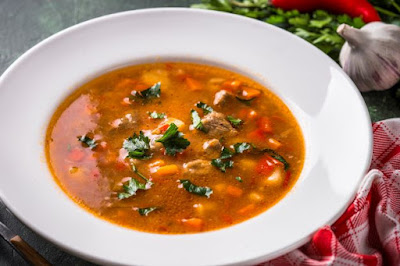 Czech goulash differs from Hungarian goulash, of course. It tends to be milder and beefier, with fewer vegetables than its Hungarian counterpart; it's sometimes made with beer, and it's always served with houskové knedlíky, the ubiquitous Czech bread dumplings, not noodles, potatoes, nor sour cream. 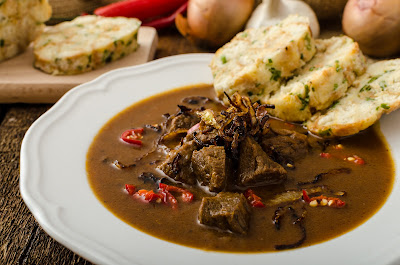 Gulaš is often served with fuži, njoki, polenta or pasta. It is augmented with vegetables. Green and red bell peppers and carrots are most commonly used. Sometimes one or more other kinds of meat are added, e.g., pork loin, bacon, or mutton. 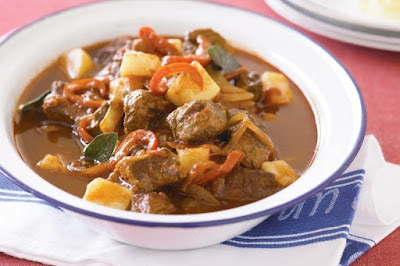 LINK to Croatian Goulash Recipe
German goulash is a hearty beef stew, seasoned with onion, paprika and caraway seed. It's a simple but rich and comforting one pot meal that's great over egg noodles, mashed potatoes or spaetzle. Learn how to make this easy German goulash recipe in one pot with a Dutch oven, slow cooker or Instant Pot. 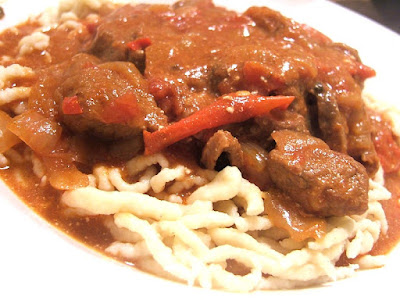 THERE ARE ALSO GOULASHES IN THE FOLLOWING COUNTRIES:

Following is a link to a WIKI article about Goulash:
LINK to Wiki and Goulash

Posted by Internationalfoodblog.com at 2:36 PM