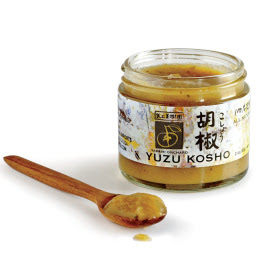 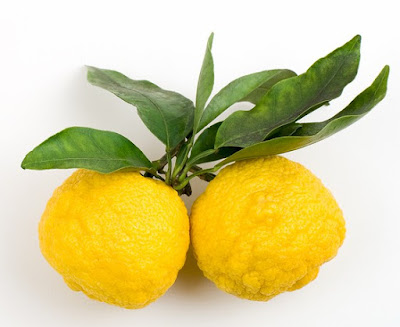 LINK TO INFO ON THE
CONDIMENT YUZU KOSHO

MORE ON YUZU KOSHO FROM THE GOURMET SLEUTH

RECIPE FOR MUSHROOM SALAD WITH YUZU FROM EPICURIOUS

Meet yuzu kosho oil, the easy-to-make hot sauce that will have you obsessed. Yuzu kosho, a fermented chili-yuzu paste, is common in Kyushu, in southwest Japan, where it’s often sold in a little jar, says Ganso Yaki co-owner Harris Salat. His executive chef and co-owner, Tadashi Ono, dreamt up a riff on the paste (which on its own is too thick to use as a sauce), which they call “yuzu kosho oil,” and which is as easy as pie to make on your own.
And it goes on everything: chicken? Yes. Beef ribs? Yup. Sautéed mushrooms? Absolutely.
Ono simply took the yuzu kosho, added yuzu juice and a glug of oil, and put a little jar of it on every table. As Salat says, “It works great with fish, pork, chicken, beef, lamb; it’s so versatile!”
It’s also insanely addictive. Give it a whirl, use it on everything, and report back!
Yuzu Kosho Oil
Courtesy of Tadashi Ono, Ganso Yaki
½ cup vegetable oil (such as soybean oil)
1 tablespoon red yuzu kosho* (available online and at specialty Asian markets and Amazon.com
½ tablespoon yuzu juice.
Blend together until smooth. Store in refrigerator for up to one month.
*Melissa Clark, genius recipe developer for The New York Times, suggests that, if you’re not able to find bottled red yuzu kosho, you can substitute 1 teaspoon of hot sauce or chile powder mixed with 2 teaspoons fresh lemon juice and 1 teaspoon lemon zest.
Recipe from Martha Stewart

This tasty dish, courtesy of chef Takashi Yagihashi (Takashi's Noodles), is a great way to serve noodles on a warm day.

Posted by Internationalfoodblog.com at 3:30 PM