The Peloponnese—the fertile, palm-shaped peninsula on the southernmost end of the mainland—hosts the breathtaking ancient theater of Epidaurus, as well as the medieval fortified cities of Monemvasia and Pylos. Food fans come for the olives and olive oil, the abundance of vegetables and fruit, and some of the most important Greek wines. 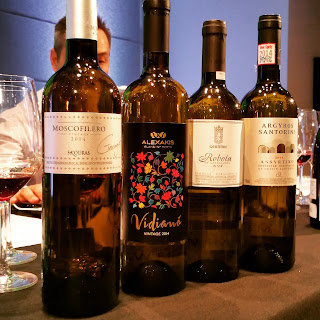 The Peloponnese has lush vegetable gardens, green hills, the clear blue sea, and the two-storied mud-brick homes with the red-tiled roofs in the middle of lemon 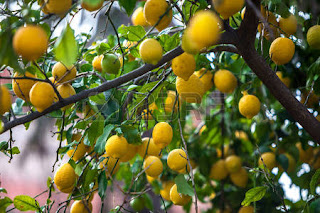 or apricot orchards—many of which remain, still producing wonderful fruit. Driving down the old narrow winding road through the particularly fertile Argos plain (in the eastern central part of the Peloponnese), we'd trail behind trucks brimming with cabbages, carrots, tomatoes, apricots, 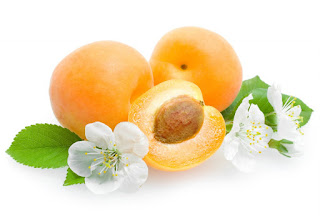 and melons. A modern highway has replaced the narrow road, but the area still has wonderful produce such as the justly famous argitikes melitzanes (long, light-purple eggplants); 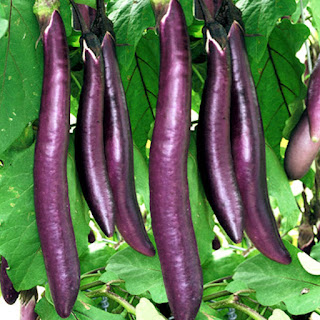 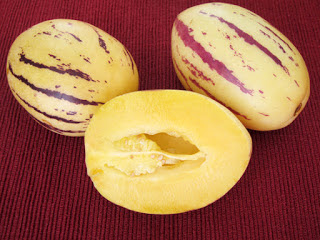 From the beautiful ancient city of Nauplion (also spelled "Náfplio" or "Nafplion"), which was the first capital of modern Greece, artichokes. 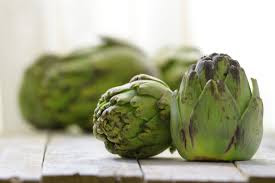 which are cultivated in the fields behind the beach of Kandia. If you visit in spring, you might get to go to the annual artichoke festival, organized by producers to try to reintroduce this wonderful edible bud to young Greek cooks, who seem increasingly reluctant to devote the time needed to peel and prepare them.
Olive oil, a key ingredient in all parts of Greece, is especially important in the Peloponnese: I have seen locals bring a bottle of their own oil 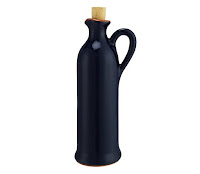 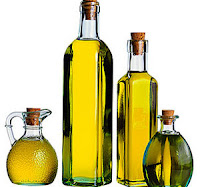 to taverns and drizzle it liberally over the already dressed salads, the soups, even the oil-drenched vegetable stews that are brought to their table. In Mani, the southernmost tip of the peninsula, pork, the meat of choice in the Peloponnese, is also preserved in olive oil. There are seven DOC (Protected Designations of Origin) olive oil regions here, with most of the oil being made from koroneiki olives (other varieties include athinoelia, kolyreiki, and lesser-known regional strains). 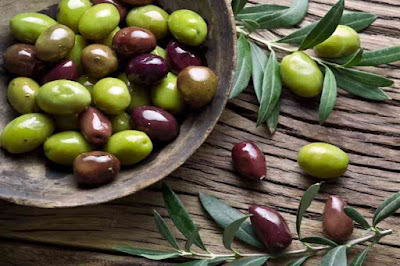 Tripolis, high in the mountains of Arcadia, and the picturesque villages of the plateau in central Peloponnese are the pastoral center of the area. Wonderful heirloom apples, cherries, 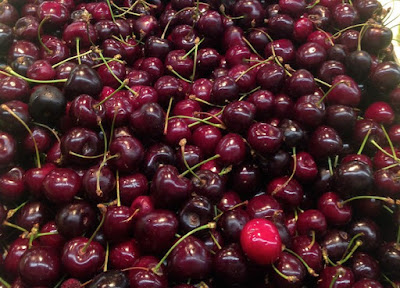 and walnuts are grown there. Locals also produce sweet and creamy Feta from the abundance of sheep's milk, some of it still aged in wooden barrels. Trahanas, 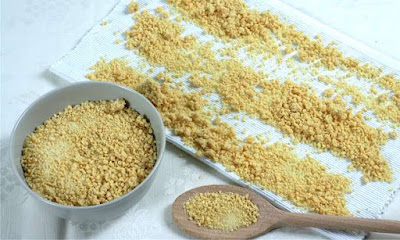 handmade pasta made from bulgur, flour or semolina, and milk or sour milk, is particularly good here.
In addition to the renowned olive oil and table olives produced around Kalamata, Sparta, and Mani, the southern Peloponnese has extended citrus groves that produce juicy and fragrant lemons and oranges. 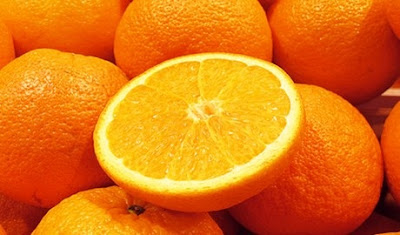 Lemon is ubiquitous in Greek cooking, as it beautifully complements the flavor of olive oil, but in the Peloponnese, oranges also find their way into the pork and vegetable stews. Kalamata is famous for its delicate, white, and sugary dried figs. 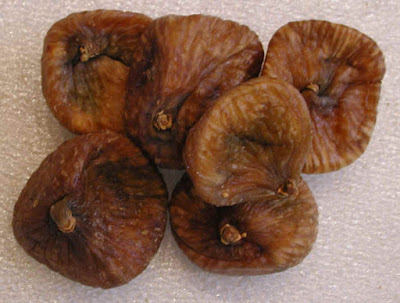 Oddly, there are very few typical Peloponnesian dishes, except for seasonal vegetables stews, made with vegetables, including zucchini, eggplant, green beans, leafy greens, and artichokes. The stews sometimes contain meat or poultry and are flavored with lemon in the winter and tomatoes in the summer. The area's most interesting peasant dish is lagotó, 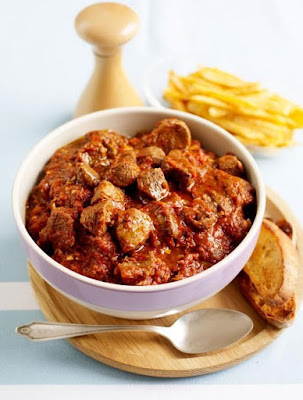 a specialty of Tripolis: Pieces of pork are cooked in a very garlicky sauce that is thickened with bread crumbs and spiked with vinegar.
Win
Wines/grapes native to this region: Nemea velvety red (made from Agiorgitiko), Mandinia aromatic white (from Mavrodaphne and Asproudes grapes), Muscat of Patras, Muscat of Rio, and Mavrodaphne sweet wines (from Mavrodaphne grapes). 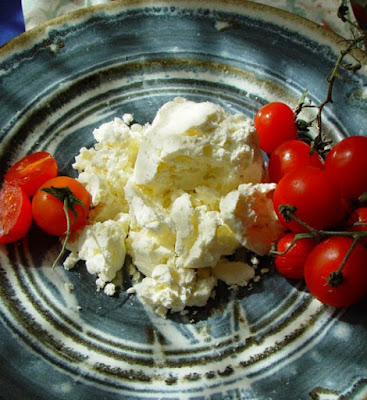 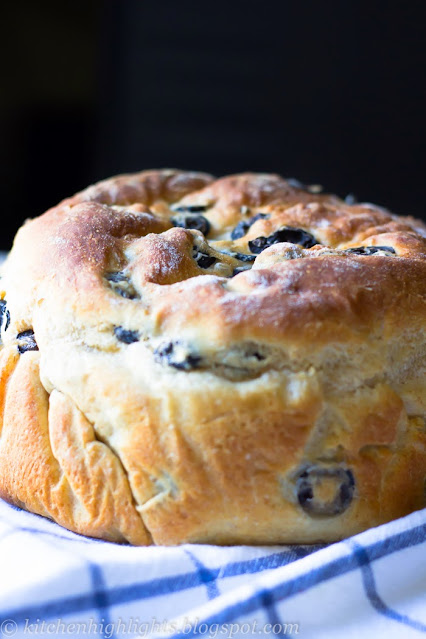 LINK to Recipe of Papoutsakia or Eggplant

Then there are hand-pressed nuggets of pasta dough into curved into shapes called gogyzes, which are boiled  and tossed with grated touloumotyri and sizzling goats' butter. 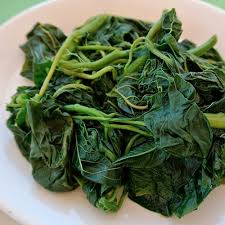 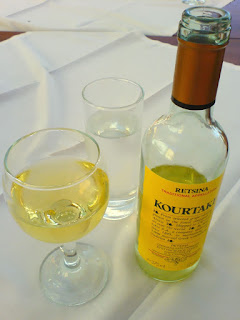 Spoon sweets are made all over Greece, however, each region has its specialties basically depending on the agricultural crops.  In Pelopponnese, red wine country, citrus zest and citrus fruits are employed in spoon sweets with Bergamot (a green-looking orange) 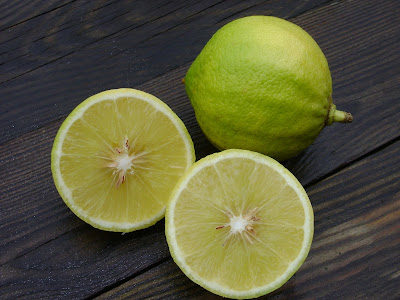 rind and a variety of orange types, unripened, ripe and sour bitter. 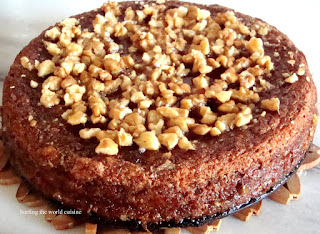 Finally, there were diples. The sweet, ouzo-spiked fritters, a requisite holiday dessert, are bigger and bolder in the Peloponnese than in most other parts of Greece. The fritters are expertly shaped, folding them with the tines of a granny fork into wide, wallet-shaped forms. After frying, the fritters are soaked in syrup. The syrup was made  honey, produced by bees in the yard and carted to locations throughout the nearby mountains so they can feed on seasonal plants and trees. Tasted the very best blend, a heady mix of fir and thyme honeys that gave notes of vanilla and caramel. 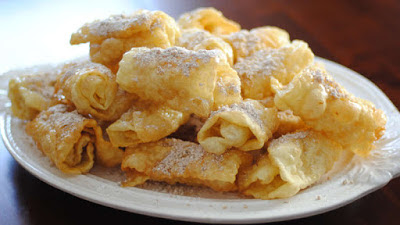 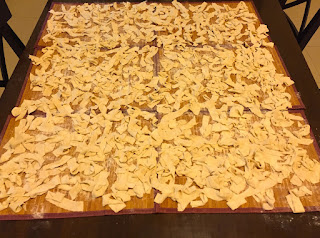 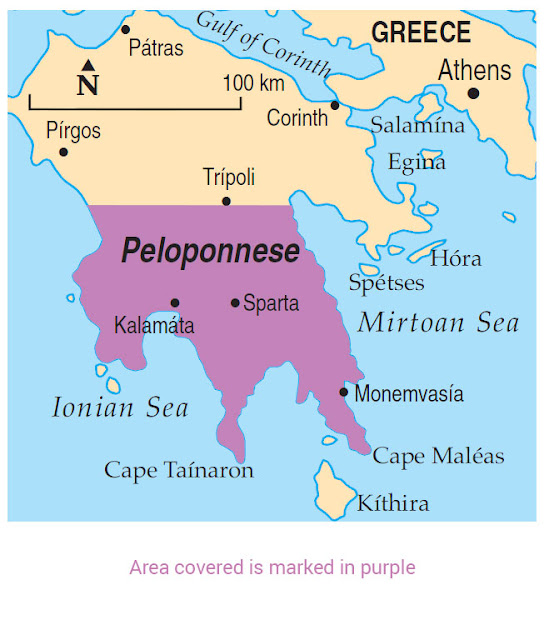 Posted by Internationalfoodblog.com at 3:32 PM