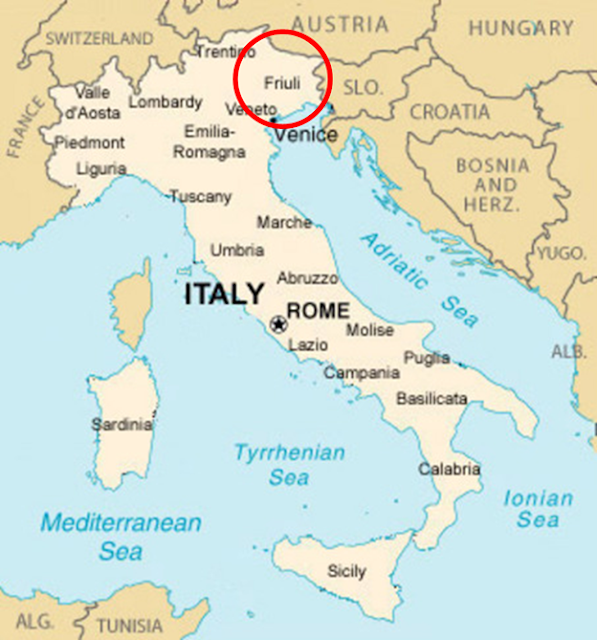 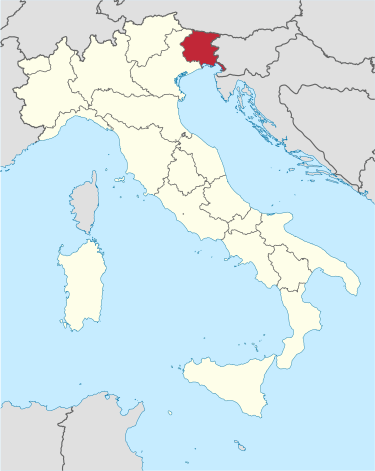 Friuli-Venezia Giulia lies on the northeastern edge of Italy bordered by Austria to the north, Slovenia to the east, the Adriatic Sea to the south, and the Veneto to the west. Throughout history, the region’s neighbors took a stab at staking their claim to the territory. Consequently, the Austrians, Slavs, Venetians, and even the Romans left their indelible mark on Friuli’s culture, cuisine, and customs.

With its origins in the Balkans, ajvar is a flavorful sauce made with charred red peppers, roasted eggplant, garlic, vinegar, and oil. The ingredients are blended to create a sauce used with sausages, cold meats, or salami in Friuli.

Map of the Balkans Both sweet and savory versions of strucolo, Friuli’s take on Austrian strudel, are enjoyed in the region. In either case, strucolo features a roll of dough stuffed with some variation of filling. Savory strucolo is served as a primo piatto, or first course, and contains just about anything. Typical fillings include ricotta, spinach, peas, or minced veal, or beef. If not baked, strucolo are rolled, tied on the ends with thread, and boiled. They may be served seasoned with melted butter and breadcrumbs or cheese. In contrast, strucolo di pomi is a popular sweet version similar to apple strudel. 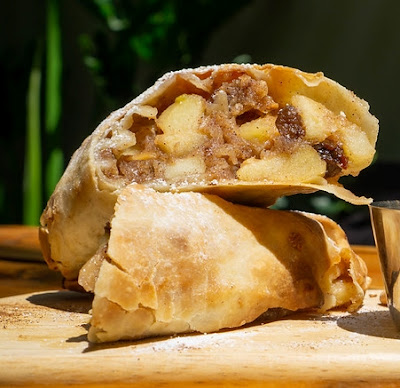 Popular in Trieste, jota is a winter staple in Friulian cuisine, as this comforting stew of beans, potatoes, and tangy sauerkraut is ideal for warming up when temperatures drop. The beans and sauerkraut, known locally as capuzi garbi, are cooked with cumin, bay leaves, potatoes, and pancetta to make this thick soup. Jota exemplifies the Austrian influence on food in Friuli 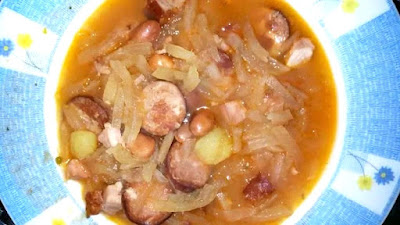 Especially prominent in Trieste yet enjoyed throughout Friuli, gnocchi di prugne are plum-filled potato dumplings popular in regions once ruled by the Austro-Hungarian empire. 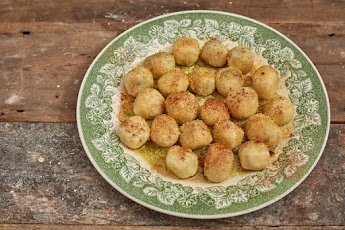 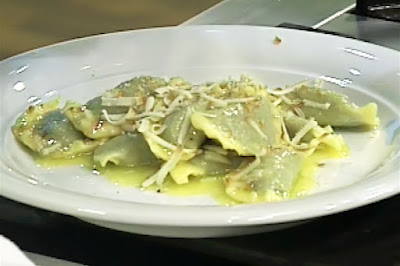 I girini is a Friulian pasta made similarly as Austrian spätzle. 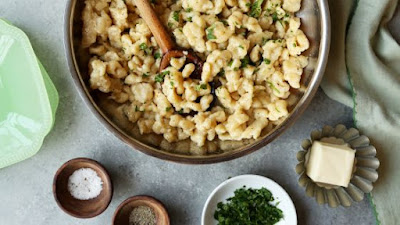 A Friulian specialty inherited from the Balkans, cevapčići are a cross between kebabs and sausages. They’re made from mixed minced beef and lamb meat, seasoned with garlic, onion, paprika, white wine, and olive oil. The latter of which helps the meat remain tender while grilling. Cevapcici is served with ajvar sauce for an authentic taste of the Balkans in Friuli. 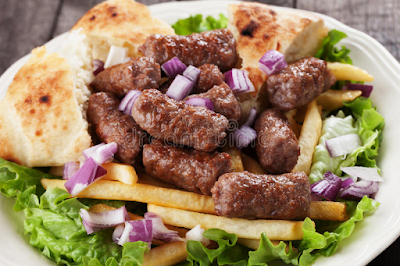 Adored in Trieste and Gorizia, presnitz is a coiled spiral of puff pastry dough filled with a mixture of dried fruits, nuts, citrus peel, cinnamon, and rum. It’s baked and then sprinkled with powdered sugar for a heartwarming dessert. Presnitz originally hails from a Slovenian town just over the border from Italy called Castagnevizza.

Goulash Triestino originates from Trieste, the capital of Friuli-Venezia Giulia, which was a part of the Austro-Hungarian Empire, and as a result, the goulash is made with Hungarian paprika, among other ingredients.

Paparot is a traditional Italian soup originating from the Friuli-Venezia Giulia region.

Friuli is a multicultural melting pot of Slavs, Austrians and Italians – the people of Friuli speak multiple languages, ranging from Venetian dialects in the south, Slovene and Bavarian in the north and the native Friulian dialect (as well as the official language of Italian).

Heavily influenced by nearby Austria, Slovenia and Croatia, Friuli is a fascinating confluence of culinary scenes – goulash is served with polenta, gnocchi are made with cherries and prunes and the most popular regional dish is jota – a stew made with sauerkraut, beans, potatoes and bacon.

The first time you see brovada in Friuli Venezia Giulia, you might well mistake it for sauerkraut – although the two are different, it’s clear that brovada has its roots over the border in Austria. Whereas sauerkraut uses cabbage, brovada takes thin slices of turnip (or whole vegetables, as above) and macerates them in red wine vinegar and grape must, before cooking it all down with oil, bay leaves and a nice chunk of fatty pork.  Polenta has roots in the north and central Italy, as well as neighboring countries, such as Switzerland, Slovenia, and Croatia.

What is Italian cuisine in Slovenia? Italian cuisine has particularly influenced the cuisine of Slovenian Istria, given the historical presence of local ethnic Italians (Istrian Italians), influence that has eased after the Istrian-Dalmatian exodus.

You’ll find that the region has just as much in common with neighboring Austria, Slovenia and nearby Croatia as it does with its homeland.

Centuries of Austrian rule have left an indelible mark on Friulian cuisine, in surprising and unsurprising ways. Friulians have a particular love for stereotypical Germanic cuisine – meat, potatoes and sauerkraut, for example – that doesn’t really exist in other parts of Italy.

The western world remains obsessed by European coffee culture, but that culture first started in Veneto and Friuli. Venice is widely regarded as the first port to start importing coffee into Italy, but the Friulian city of Trieste was just as important in the coffee trade – Vienna already had a significant coffee-drinking culture by the mid-seventeenth century, and all that coffee had to come through Trieste. The Austrian capital still has a reputation for outstanding coffee, but as a result, so does Trieste – the city is home to Illy Coffee, and the coffee bars are thriving hubs of activity throughout the day. Try a cappuccino Triestino while you’re there – it’s somewhat like a macchiato but with whipped cream instead of milk!

Jota, however, is easily the most common soup – made from white sauerkraut, potatoes, beans and pork sausage, it couldn’t be more Austrian if it donned lederhosen and yodeled The Sound of Music from beginning to end. The thick texture and hearty ingredients make it perfect fare for bracing the bitter winds and colder temperature

Strucolo is Friuli’s take on the famous Austrian strudel, but they are much more versatile than their Germanic cousins. Savory strucolo often comes as a first course and can contain almost anything; ricotta, peas, spinach and veal mince are all common. Dried fruit and chocolate are common in sweet strucolo, although if you’re anywhere around Trieste you’ll likely find them stuffed with walnuts, breadcrumbs and raisins – a local delicacy. If they’re not baked, strucolo are sometimes wrapped and boiled – once cooked, they’re sliced and served with a good sprinkling of sugar and maybe even some whipped cream for extra decadence. You'll also find plenty of Friulian bakeries serving apple strudel; the quintessential dessert of the region.

Brovada is very typical of Friuli, and another great example of the region’s Austrian heritage. Turnips are cut into small slices or left whole and macerated in red wine vinegar and grape must before being cooked down very slowly in a pot with a splash of oil, bay leaves and a fatty piece of pork. The result turns out very much like sauerkraut – the vinegar pickles the turnips whilst they cook down, and the finished brovada is often served with muset – a large pork sausage made from pig snout that's similar to cotechino.

Stews are common in Friuli Venezia Giulia, and gulasch is especially popular in the winter. Though we typically associate gulasch (or goulash) with Hungary, Austria and Hungary have only been independent since the end of World War One, so they have a huge amount in common. Gulasch in Friuli is very similar to that you’d find further north – big chunks of melt-in-the-mouth, slow-cooked beef with lots of hot pepper and paprika. The Italian twist? Gulasch in Friuli is normally served with polenta – a staple all across the north of Italy.

Mainland cuisine is more characterized by the earlier Slavic and the more recent contacts with Hungarian and Turkish cuisine, using lard for cooking, and spices such as black pepper, paprika and garlic.[The coastal region bears the influences of the Greek and Roman cuisine, as well as of the later Mediterranean, in particular Italian (especially Venetian). Coastal cuisines use olive oill, herbs and spices such as rosemary, sage, bay leaf, oregano, marjoram, cinnamon, clove, nutmeg and lemon and orange rind. Peasant cooking traditions are based on imaginative variations of several basic ingredients (cereals, dairy products, meat, fish, vegetables, nuts) and cooking procedures (stewing, grilling, roasting, baking), while bourgeois cuisine involves more complicated procedures and use of selected herbs and spices. Charcuterie is part of the Croatian culinary tradition in all regions. Food and recipes from other former Yugoslav countries are also popular in Croatia.

Posted by Internationalfoodblog.com at 3:19 PM